At a time when it’s important to say something real and to show where one stands on the serious issues of the day, everything an artist puts out is made exponentially more significant. It can be an opportunity, but it can also be a impediment. Depending on where an artist is with a piece of work or works, having to respond --- no, wanting to respond --- to topical issues makes the work of knowing what your audience wants more complicated.

Most art tells a story in one way or another. As a songwriter I tend to tell stories with my songs. As I produce my next album, I realize more and more, I’m also telling a story with the kinds of songs that I put on the album. The overall theme can say so much more than any one individual track. And that’s where I find myself running into a bit of a holdup.

For the past 8 years, while living a very full life, I’ve also been working on a follow-up album to my 2008 release of Stone to Stone. As I’ve been working on this album, I’ve been taking stock of my life --- the good, the bad, the lessons learned and the new me that has resulted. I’ve written some of my best songs to date for this release. 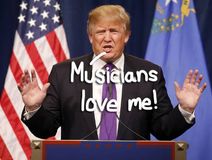 The best songs for me, however, aren’t necessarily the best for the times we are facing. To be valid as an artist, sometimes one must directly address the present while clarifying the thoughts that so many are feeling. One must put into their own words the plight of the masses in an effort to bring our better angels to the fore. This, however, has made the decision to release songs that were meant for a completely different state of mind questionable. Some songs will be perfect ---songs about having to fight, or living as full a life as one can, or just observing the ships as they pass by a window. But songs about resolution and no longer needing to fight are completely out of place at a time like this.

As a songwriter I have among my goals, the goal to connect with as many people as possible through my art. If I know something isn’t going to connect with the people I so wish to be embraced by, I’m not going to use it. If I know pushing some buttons is going to be good for the social conversation and help me connect, you're damn sure I’m going to pull those cards!

Ultimately, everything happens for a reason. I however shall be placing full blame on Donald Drumpf and the singles he is inspiring for any delays in my next album!